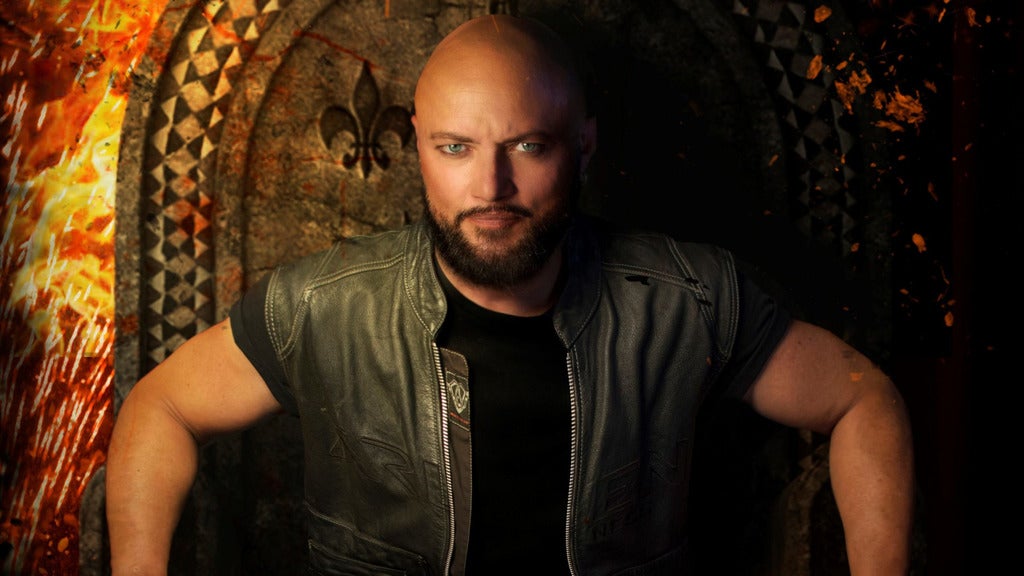 Taking the operatic vocal stylings of Judas Priest's Rob Halford and Iron Maiden's Bruce Dickinson to whole new levels, Geoff Tate was the founding vocalist and lyricist for Queensrÿche and its chief conceptualist. He is one of heavy metal's most technically accomplished singers and remains popular long after acrimoniously leaving the band and undertaking a solo career. Tate has issued two solo albums, as well as a conceptual trilogy (The Key, Resurrection, and The New Reality) between 2016 and 2017 with a band named after Queensrÿche's Operation: Mindcrime. He has also appeared live and on recordings with Avantasia. Born on January 14, 1959, in Stuttgart, West Germany, Tate and his family relocated to Tacoma, Washington, soon after. He became interested in music at an early age, especially symphonic works (additionally, his family always sang around the house, while his aunt was a talented opera singer). But Tate initially focused on a career in football until a knee injury prevented him from pursuing it any further. Soon after, he began to sing in local high school rock bands, including one such group called Tyrant. After attending Tacoma Community College for a year, Tate took a job with the Washington State Search and Rescue Team, a group that was trained to assist in "the recovery of crashed planes and lost people," mainly in the Rocky Mountain region not far from Tacoma. Tate continued to sing with other bands during this time, including such local outfits as Myth and the Mob, the latter of which would become Queensrÿche by the early '80s. The Warning Mixing progressive rock with heavy metal, Queensrÿche built a regional following, and even toured with such national acts as Quiet Riot, Twisted Sister, and Dio, solely on the strength of an independently released, self-titled EP from 1983. Tate and Queensrÿche soon signed on with EMI Records, which resulted in such further releases as 1984's The Warning and 1986's Rage for Order. It was also during this time that Tate lent his vocal talents to Ronnie James Dio's Hear N' Aid project, which featured many of the day's top names in heavy metal. The resulting song and album (both titled Stars) helped raise money to fight world-wide starvation. But it wasn't until Queensrÿche's sprawling 1988 concept album, Operation: Mindcrime, that the group broke through to the mainstream. Touring for over a year (and opening sold-out tours for such big names as Def Leppard and Metallica) led to the album enjoying a long life on the charts, eventually earning platinum certification. The band scored an even bigger hit with their next release, Empire, which scored a Top Ten hit single with the ballad "Silent Lucidity." Promised Land Tate and Queensrÿche took a much-needed break from recording and touring in the early '90s, during which time musical tastes changed dramatically, thanks to (ironically) several younger bands who also hailed from Queensrÿche's hometown of Seattle. The group never scaled the same commercial heights again, but still managed to retain a sizeable and dedicated following with such albums as 1994's Promised Land, 1997's Hear in the Now Frontier, and 1999's Q2K. Stone Cold Queen: A Tribute The early 21st century saw Tate contribute vocals to a cover of the Queen classic "Somebody to Love," for the tribute album Stone Cold Queen: A Tribute, in addition to issuing his very first solo album in 2002, a self-titled affair that featured musical styles usually not associated with the Queensrÿche frontman. Tate was also rumored for some time to be involved in a new group, the Three Tremors, which would also include the aforementioned vocalists for Iron Maiden and Judas Priest, Bruce Dickinson and Rob Halford, respectively. Despite each singer confirming the project in the press, an album never surfaced. Kings & Thieves Tate was fired by his Queensrÿche bandmates in June of 2012. He unsuccessfully sued the band to prevent them from using the name. While the judge ruled against him, she also ruled that Tate could legally use the name as well. To that end, he formed another band using the Queensrÿche moniker, with drummer Bobby Blotzer (Ratt), bassist Rudy Sarzo (ex-Quiet Riot, Ozzy Osbourne, and Whitesnake), former Megadeth and King Diamond guitarist Glen Drover, former Queensrÿche guitarist Kelly Gray, and keyboardist Randy Gane. The group released Kings & Thieves in October 2012. After the final settlement detailed that his former bandmates were entitled to the band name exclusively -- they bought him out -- Tate retained the ownership of Operation: Mindcrime and Operation: Mindcrime II (Queensrÿche were allowed to perform material from it, but neither album in its entirety). He also toured using the Queensrÿche name for a legally allowable two years. In 2013, under the band's moniker, he issued Frequency Unknown. His band embarked on their "Operation: Mindcrime Anniversary Tour" in April 2013, to celebrate the album's 25th anniversary; it concluded in September 2014. After exhausting his legal right to the Queensrÿche name, Tate renamed his band Operation: Mindcrime. In 2015, John Moyer, Brian Tichy, and Scott Moughton joined as full-time members. Their debut album, The Key, the first part of a trilogy that focused on virtual currencies, Internet banking, and legal and conspiratorial stock market and financial trading, was released in September 2015. Seasoning the band on the road, Tate followed the album with Resurrection in 2016 and concluded with The New Reality the next year. In 2018, Tate was approached by Frontiers Music to record a collaborative album with guitarist, bassist, producer, and engineer Simone Mularoni (DGM, EmpYrios), a longtime fan of the singer and Queensrÿche. Mularoni enlisted keyboardist and DGM bandmate Emanuele Casali and drummer Paolo Caridi. After trading songs and mixes back and forth, they dubbed the project Sweet Oblivion and issued a self-titled album later that year.
We use cookies on our website to give you the most relevant experience by remembering your preferences and repeat visits. By clicking “Accept”, you consent to the use of ALL the cookies. However, you may visit "Cookie Settings" to provide a controlled consent.
PRIVACY POLICYCookie SettingsACCEPT
Privacy & Cookies Policy