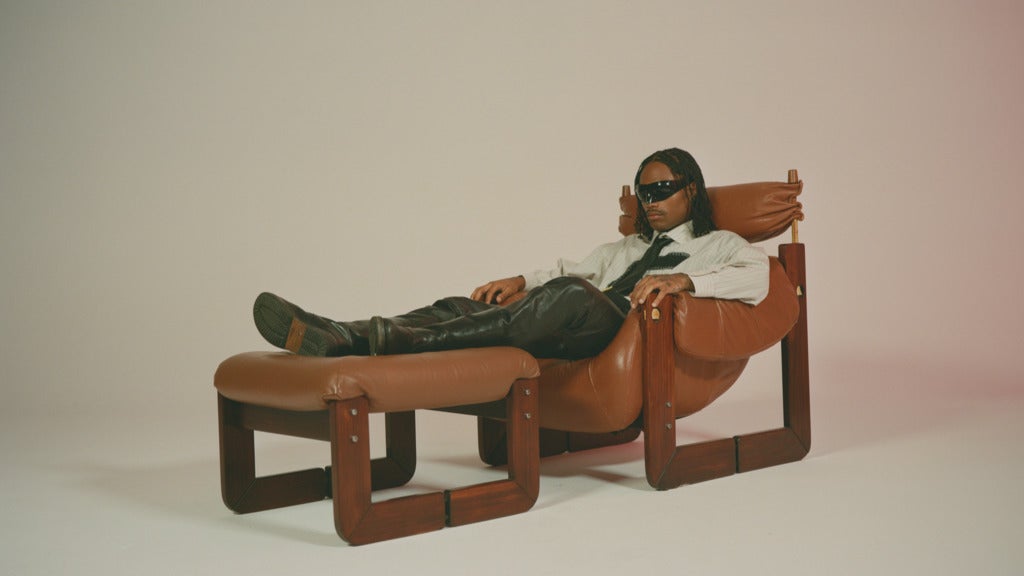 Alternative R&B artist Steve Lacy is in a presumably small class of musicians who have co-produced a Grammy-nominated album while still in high school. Foremost a guitarist, singer, songwriter, and producer, the musician joined in 2014 and made his recorded debut on the band's Ego Death (2015), which the Recording Academy nominated for Best Contemporary Urban Album. Lacy has since worked on his bandmates' assorted solo releases and outside the group has become a highly sought-after collaborator across genres. 's "Foldin Clothes," 's "PRIDE.," 's "911/Mr. Lonely," and 's "Sunflower" were among the highlights added to his songbook through the tail-end of the 2010s. He has also released lazing, heartfelt solo material, including the EP-length "song series" Steve Lacy's Demo (2017), the Grammy-nominated full-length Apollo XXI (2019), and the Top Ten follow-up Gemini Rights (2022). A native of Compton, California, Lacy became interested in the guitar while attending church. His mother obliged him by buying him his first instrument and lining up lessons. Befriended in high school jazz band by upperclassman Jameel Bruner, Lacy entered the orbit of , and in 2014 joined Bruner's band as they worked on their third studio LP. Using mobile device applications, he co-produced over half of the songs on Ego Death, released in June 2015. The album, which also featured Lacy's multi-instrumental work, entered the upper half of the Billboard 200 and was subsequently nominated for a Grammy in the category of Best Urban Contemporary Album. During 2016, the year he finished high school, he began his self-termed "song series" with the funky, easygoing "C U Girl," and branched out with contributions to recordings by and , as well as and 's project, and . He also co-produced "Foldin Clothes" for 's Billboard 200-topping 4 Your Eyez Only. Lacy was even more active throughout the next few years. bandmates and Syd released Lacy-assisted solo sets during the first couple months of 2017. During the same period, Lacy issued Steve Lacy's Demo on the independent label. By the end of that year, he co-produced and was featured on 's "Some Girl," and co-produced 's Top 40 entry "PRIDE." (off the Grammy-winning DAMN.) and 's "911/Mr. Lonely" (off the Grammy-nominated Flower Boy). Early the following year, he produced and co-wrote the entirety of 's Crush EP and contributed to 's Top Five hit Swimming, ' Isolation, and 's Negro Swan. That July, 's Hive Mind arrived with Lacy handling a heavier load of the band's production, songwriting, and playing duties -- guitar, co-production, and co-writing on all tracks, plus some co-lead and background vocals, keyboards, synthesizer, and drums on others. He made high-profile appearances in early 2019 on 's When I Get Home and the single "Sunflower." That May, shortly after he appeared on ' The Last Party, Lacy released Apollo XXI, his first solo LP. It landed on the Billboard 200 and was nominated for a 2020 Grammy. Also that year, he released the non-album single "Live Without Your Love" with . As a producer and featured artist, Lacy was one of the key contributors to 's Hypnos, issued in May 2022. Two months later, he hit number seven on the Billboard 200 with his second full-length, and first through major-label , Gemini Rights. Written in response to a breakup, the album sported a richer sound with assistance from the likes of , Ely Rise, , and , Lacy's duet partner on "Sunshine."
We use cookies on our website to give you the most relevant experience by remembering your preferences and repeat visits. By clicking “Accept”, you consent to the use of ALL the cookies. However, you may visit "Cookie Settings" to provide a controlled consent.
PRIVACY POLICYCookie SettingsACCEPT
Privacy & Cookies Policy